Faces of Shift with Karl Schroeder 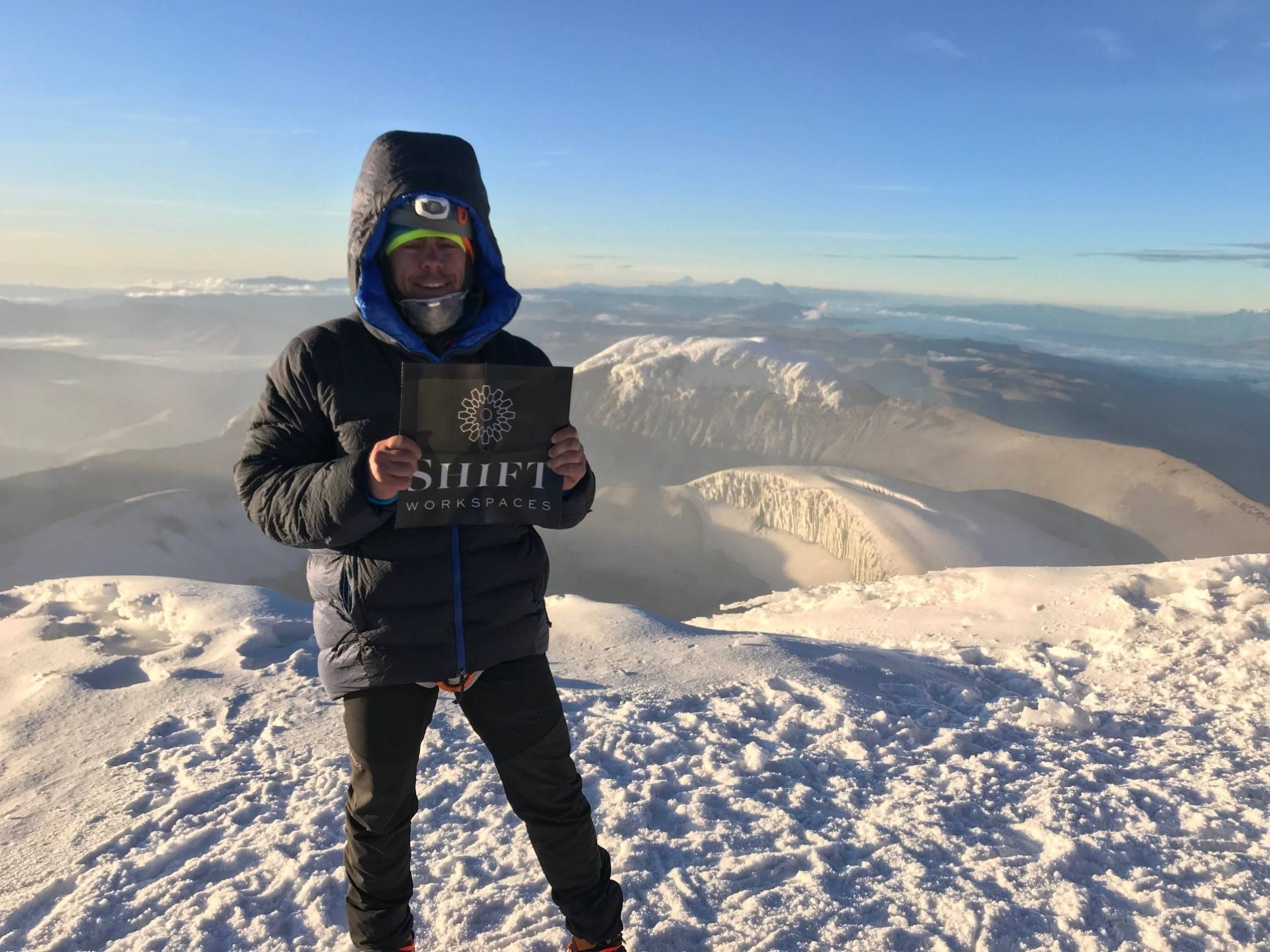 Shift Bannock was thrilled to sit down with one of our members and learn about Karl Schroeder and his company Schroeder & Co.

Schroeder & Co. is a coaching, speaking and experiential team building practice. Karl works with successful, high-performing people to reinvent their life and businesses or take them to a new level of success in both. “In a way I help powerful people remember how powerful they are. I get to work with amazing people who have this really powerful contribution to offer and are ready to shake things up, to get results on a big dream, or goal, or new project.” Several years ago, Karl met a coach and current Shift member, Stephen McGhee, who interviewed Karl and invited him to a leadership program built around mountains and climbing, the capstone of that project was to summit Aconcagua, the tallest peak in the southern hemisphere. “It was a dream project for me,” Karl recalls… “I wasn’t able to enroll in the program at the time but was deeply inspired by that one conversation. It shook something loose in me and so I made it my job to become Stephen’s shadow.” Karl assisted Stephen with small projects over the following years until the time came that he enrolled with Stephen to coach him on building his own practice.

In a way, this career has been a lifetime in the making for Karl. He grew up in a coaching environment, learning from coaches and role models and has consulted and worked in leadership roles in the outdoor industry, social enterprise, technology and startups throughout his career. “I don’t think I’ve ever held a position in a company that existed before me, that I wasn’t responsible for creating,” Karl notes.

When asked what motivates Karl as a coach; he answered with the most honest answer.  “What motivates me is this: failure. I love seeing people transform, come alive and get what they really want, and you gotta be willing, at some level, to take some risks and come up short. That is a big difference between creation and problem solving. In problem solving we try to make things we don’t like to go away. In creation, we try to make things we truly care about exist.  I dig this remark by Alain de Button, if you’re not embarrassed by who you were a year ago, you’re not learning enough It’s not the only path forward. But it’s been my observation that it’s the fastest.”

Karl elaborated, “the connection economy is here, and it happened fast. Traditional leadership styles struggle while competition and speed to just about everything is increasing at an exponential rate. We need a lot more failures, I think. Failures that don’t kill us make us stronger, bolder, and teach us one more way that doesn’t work, while opening the door to things that might.”

If you want something and you don’t have it. It’s because you don’t deserve it. It’s been Karl’s observation that the only way to achieve success is to become the person who deserves it. You’ve got to be willing to try things, experiment, and celebrate both success and the failures. It’s the same kind of design thinking approach fast companies and innovative teams are using to create market opportunities quickly in uncertain environments. It’s about building a healthy relationship with this process, and with self, and with your team. Change comes from raising your standards, not your ambitions. And when you do that there really is no standard upon which to judge. Had Karl not been willing to try and fail and try again. Simply resting on goals and dreams, he does not think he would be where he is today.

Karl was excited to tell us about his 2-week trip climbing Cotopaxi.  “Yes! I was selected this year as an Elite Team Member to climb Cotopaxi this year with the Range of Motion Project, a global healthcare nonprofit dedicated to serving underprivileged amputees in developing countries with functional prosthetics. There were 23 of us in total, 13 amputee climbers.”

For Karl, this project was about learning, growth and creative choice. “Many people debilitate themselves. Some people choose to adventure into new possibilities despite every reason not to. They show us what’s possible through commitment and powerful choice.”

Inspiration meets us at the intersection of conscious thought and action, how we choose to live. As his teammate, Adrianne holds, “A victim is defined by what happened in their life. I am a survivor, defined by how I live my life.” Her words encapsulate the spirit of this team.

Karl felt inspired, grateful to be a part of it. “That’s what called me to do it. I’ve never done anything like that. Raising the dollars and awareness required as an Elite Team member was much scarier to me than climbing the mountain. I’ve been climbing for a while now but raising those kinds of dollars was a new challenge for me. I know things now that I didn’t 3 months ago. That’s what it’s all about.”

Karl offered this advice to those interested in similar mental and physical goals.  “Go fast and take chances. Write down your goals and throw them out. Focus instead on these three questions.  First, what is the experience I want to have?  Second, in what areas do I need to grow to make this experience a reality?  And third, what is the impact I want to leave in the world? Create metrics that matter and work from this place today.  If you want it, become the person who deserves it. Oh, and get a get a coach!”

Karl has greatly benefited from making Shift his home for Schroeder & CO.  “I’ve worked in many of the big coworking spaces in Denver. Shift is different. It’s the culture. It’s the people. I learned this from Seth Godin. Culture is like this: people like us do things like this. It’s an emergent thing. Sabrina, Crystal, Maggie, everyone who calls Shift home makes it what it is. Doesn’t hurt that the location and space is pretty amazing too. I get to look forward being there every day. My day is always a little bit better when I get to spend time at Shift and with my peeps. How cool is that!”